So, remember how the other day I was all “oh I’m so old and pathetic because I ended the weekend sore and exhausted just from doing my mom thing”? Of course you do…it was just yesterday.

Anyway, turns out maybe I’m not so old and pathetic after all. Sunday evening I had a twinge of a sore throat. Didn’t think much of it since Andy had been fighting a sore throat for the last week or two. Woke up yesterday and it was worse. Way worse. Still, powered through my day.

Well as the day went on, the “I worked out to hard” soreness morphed into over all weak body aches. Horrible headache. Then my throat got even worse. Last night I slept like crap. And today I’m taking my first ever “send the kids to school and come home sick” day. I’ve already taken two naps and about to make it three.

Look, you know it’s bad when I give up my coffee and drink tea instead. I haven’t even had the tv on.

Seriously…this constant string of sickness happening in this house just needs to moves the hell on. I’m over it.

Ironically enough, I just wrote a post for Liberating Working Moms about how for the first time ever I’m taking vacation days for actual vacationy-type things this year!

So…yay for vacations. Yay for not being as old & lame as originally thought. Yay for naps. Boo for being sick.

I hope my throat feels good enough to eat dinner because Taco Tuesday!!

So…today I’m voting. And it’s not because I want to. But because I have to.

Seriously. I hate politics. And pretty much everything that surrounds them.

Probably because I have no strong feelings/affiliations one way or another.

I am registered as one particular party, but have been known to vote for the other.

I tend to be economically conservative but socially liberal. But not always.

I’m small business minded. I’m married to a teacher. I have a lot of family & friends in law enforcement. I own guns. I could give less than two shits about sexual orientation/who you choose to marry. And I’m a woman, so of course there’s that to consider as well.

Oh yea, I’m also one of those assholes that thinks anyone on public assistance should be regularly drug tested.

So you see? Somewhere in the middle. {Again, the blog name is not just some clever title.}

Actually, in Oregon, we vote by mail so really, I could have voted weeks ago. But I’ve been putting it off because I hate it so much.

But, I’m doing it because it’s my civic duty to vote. And not just mine, but ours too.

Because if I have to do it, so do you.

You cut a hole in the box.

I’m on a roll this week with innuendo titles.

I’ll be real with you. I gained 35 pounds while I was pregnant with Reese.  And for the longest time after having her, I’d look in the mirror and think, ‘crap, I look good for just having a baby.‘

Now? Well, like I said, let’s be real. My baby is going to be 3 months old next week {THREE MONTHS!}. I’m not so sure the “for just having a baby” thing applies anymore.

Some of my pants are fitting again. I’m down about 20 pounds. But that also means I’ve got about 15 left to lose. With Ry I lost all but two pounds within the first 6 weeks just by breathing. That is clearly not the case this time around. I blame my massive sweet tooth this pregnancy.

Not only do I have about 15 pounds left to lose, I’ve got some major toning to do. Major. And I’ll be honest…my poor belly button will probably never be the same.

So, the first step to fixing a problem is admitting there’s a problem, right?!

I’m breastfeeding Reese so I still need to keep my calorie intake pretty high up there {thankfully}. I want to do this the healthy way.

I have the 30-Day Shred on DVD, but let’s be real…if I were really committed to that I’d already have started it.

I’ve looked into joining the gym that’s a few blocks away from my work. Lunchtime workouts would be great. It’s affordable. But the gym is tiny and they don’t offer any classes. And I love me some group fitness classes….or moreover, I love me some teachers that tell me what I need to do! I’ll be starting the free 2-week trial next week to see how I like the gym itself.

I have My Fitness Pal on my phone and have been tracking my food intake. If that’s not an eye opening activity, I don’t know what is. Wow.

I downloaded an ab workout app on my new iPad {sorry, totally had to fit that in somewhere.}

I may document progress on the blog. I may not. I may include photos. I may not. We’ll see.

So there you have it. I’m on the road to health & fitness again.

Well you know…right after I’m done spending the next four days stuffing my face parts with southern food. Obviously.

Over the last couple of years I’ve read and followed lots of blogs. Many of which are bloggers right here in the good old Pacific Northwest.

Last year, a few bloggers got together and decided to put together a PNW Blogger meet-up in Seattle in September. I worked up the courage to talk to Andy about wanting to go. After he got done laughing at me, he was all, “hey, go have fun!”. Well, after car pooling and hotel sharing plans fell through with a few ladies, I ended up not being able to go. I was totally bummed out.

{Turns out that’s the same weekend I ended up having the miscarriage, so it was a total blessing I didn’t go}

Anywho, fast forward a few months and there were plans thrown out for another meet-up! This time in Portland! Woo-to-the-hoo! Tickets went on sale. I talked to Andy about it, got things squared away to go, then went to buy my ticket and they had already sold out.

So, yesterday, while I’m wishing Mandy a happy birthday, she asks me if she’ll be seeing me at the blogger meet-up. I reply with a sad no…unless Chelsea (the event coordinator) is able to pull a magic ticket out of the air.

No freaking joke, I send that reply and not more than two minutes later, I get an email from Chelsea saying there’s a ticket available if I want it!

Of course, I have to get back to her ASAP because there’s other ladies on the waiting list that want to go. I’m never able to get ahold of Andy during the day, but it’s about lunchtime-ish so I try him on a whim. He answers! I tell him what’s up. He tells me to go! Have fun!

All I know is that I’m leaving work in a couple of hours, headed up to Portland to hang out with a bunch of super awesome ladies I’d been dying to meet for a very long time.

No joke, some of them have even made appearances in my dreams. {And I totally mean that in the least creepy way possible.} You know when one thing goes wrong it’s like a million things go wrong?

Well I feel like that happens to us all.the.time. And right before, or was it right after, Christmas was no exception. Andy was on his way to cut firewood with my dad in our Suburban and they got home way to soon. Something had to be wrong. Oh and it was…they were lucky to have made it back home. The Suburban broke down on their way and they had to turn around and come home. We knew the Suburban was going to need a new motor sooner or later, I mean it’s a freaking ’89 for cripe’s sake, but we were banking on the “later” part. Anyway, off to the mechanic it went. And stayed for a few weeks. We were, thankfully, able ot bandaid it and put of the new motor for at least a few more months.

That same weekend, we were told by our renters that there was a leak in the roof of the house. Well, eff. The leak pretty much ruined the new laminate flooring Andy had JUST installed in July before they moved in. Luckily, he was able to pretty easily fix the leak and the floor doesn’t really need to be replaced, it’s just a little bit warped in one spot.

Well, then, right after we got the Suburban back from the mechanic’s I went to start and warm up our ’88 Buick {seriously, y’all, I told you we be glamorous high rollers} in the morning before work. I noticed it did sounds like it normally did. I headed back in the house to grab my stuff and give kisses goodbye only to come back outside to find the Buick not running. What the whaa? So naturally, I tried to start it again. No dice. So to the mechanic the Buick went.  {Side note, our mechanic freaking loves us}

At this point it was right before the end of the year and not knowing what the deal was with the Buick we started talking about getting a new car. Could we afford it right now? We haven’t had a car payment since a month after we were married, so that’d be a major adjustment. But, my student loan would be paid off within the next 3 months, so well…could we really afford it? We decided we better wait to hear back from the mechanic before making any decisions.

But, being the dreamer I am, I was on Toyota’s website looking at new cars the next day.

Here’s our {or my} requirements for a new car/Buick remplacement:

Ok, so based on our criteria I’m thinking, when the time comes to replace the Buick, we’ll be looking at something along the lines of a Corolla or Matrix on the lower end or, maybe we’ll even think hybrid {I mean the man does drive 70+ miles a day}…and go with the surprisingly affordable, family friend Prius V. 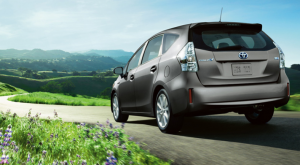 At this point it’s just a waiting game, but let’s hope when the Buick does make it’s last ride, that’ll be the ONLY thing that goes wrong.

{And by last ride, I mean I’ll be throwing a party and doing a happy dance}