My baby just had her 12-month well check! Last week, but whatever, life is busy yo. And yes, she did turn one over a month ago. For the record, I had her appointment scheduled for just a few days after her first birthday but they cancelled it…we found out when we got there to check in. That was less than awesome. Since we wanted to do both Rylee’s 5 year check and Reese’s 1 year check together it took a little longer to get them worked in to the schedule together. Annoying but meh, it’s done. 5 shots and 1 blood draw later, on to the good stuff.

Teeth: She’s up to 12 now! She cut her first molars while we were in Hawaii. So that was fun.

Food: There’s not much this girl won’t eat. Since our last check-up when I found out she was anemic, she’s been eating pretty much everything we eat. Including lasagna, enchiladas, bacon etc. She loves it all. It’s really funny to watch her feed herself because if you put a few different items on her tray, she will always go to whatever her favorite thing is first. Always. And it seems that she’s gone from loving avocados, to hating them and now back to loving them again. Weird little buggar. We still use the occasional puff and jar of baby food, but less and less. Mainly if we’re headed somewhere and we don’t know what to food options will be we’ll pack them along just in case. And this girl eats.a.ton. We have to cut her off a lot of times because I swear she would eat until she bursts. We’re trying to figure out where all that food goes…she must have a hollow leg like her daddy.

She stopped breastfeeding completely on her own. The last time se nursed was on the morning we left Hawaii to come home. That made a super comfortable 6 hour airplane ride home for me. NOT. At first I thought maybe it was just a nursing strike because of her molars coming in. She had done something similar last night she cut a bunch of teeth at once. I tried nursing her every single normal nursing time for a week solid. No dice. She wanted nothing to do with it. {Funny enough, it’s exactly how Rylee weaned as well.} For the next few weeks we used of our freezer stash of breastmilk, cutting her bottles with 1/2 whole milk that last week. Now she’s 100% on whole milk and taking 2 bottles a day, right when she wakes up and before she goes to bed. She’s not a huge fan of drinking milk from her sippy cups…we’re working on that. 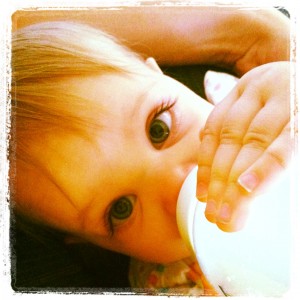 Anemia Update: We had her blood drawn and retested 6 weeks after her initial diagnosis. During that 6 week time period we had been giving her lots of iron rich foods and a supplement once a day. It took 3 weeks and a call to the doctor’s office to get the results of that blood draw. She was still low. Higher than before, but not where she needed to be. So we continued the supplements. Then at this check-up she had her blood drawn again and we received a phone call the very next day. Her blood work came back great! Her levels are within the range of where they want them. She can drop the supplements and continue to eat an iron rich diet. We’re finishing out the bottle of supplements we have then we’ll stop. She has her next well-check at 18 months and I’m assuming they will test her blood again, but they didn’t mention it when they called so we’ll see.

Movement: Reese started walking full time two days before we left for Hawaii. At this point she’s getting around really well and just about running. She got her first bloody lip a couple of weeks ago thanks to her wanting to go everywhere on her own. She ate it on the transition from the grass to our front walk. Lately she’s all about climbing. Holy heart attach she loves climbing. In to things, on top of things. She doesn’t really care. If it’s something she shouldn’t be doing, she’s going to do it. 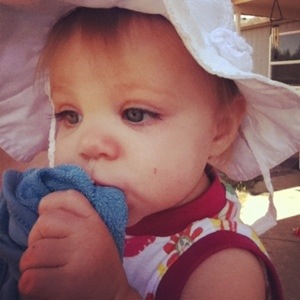 Other: Reese has picked up the baby sign language fairly well. She signs hungry, please, more and all done. Now we’re working on saying thank you and please in situations other than food related. This girl cannot be scared…it may sound kind of sadistic or weird, but we’ve started looking at it as a challenge. You sneak up behind her or jump out from around a corner yell BOO! and she just laughs and laughs. Now that she’s mobile and she has a clear opinion on things, life is getting interesting! She’s in to everything. We keep all doors closed while she’s up. All cupboards are locked. She loves getting into the drawer that has our potholders and aprons in. She’ll pull out an apron and bring it up to us, essentially asking us to put it on her. Then she’ll just walk around with it on like it’s not even there. It’s the funniest thing.

She’ll do just about anything for a laugh. I see the makings of a class clown. She loves peek-a-boo and the “uh-oh” game…you know the one…the kid “accidentally” drops something then says “Uh-Oh” and waits until you pick it up. Wash. Rinse. Repeat.

We moved her from the infant carrier car seat to a still rear-facing, but bigger car seat. She could care less. I’m finally starting to get used to it…the visibility is pretty much non-existant and I don’t like that.

While she isn’t too into snuggling anymore, she is all about giving hugs before you leave or when you get home and kisses. Oh the open-mouth kisses of a one year old. Slobbery, but almost nothing better than a baby showing their love. 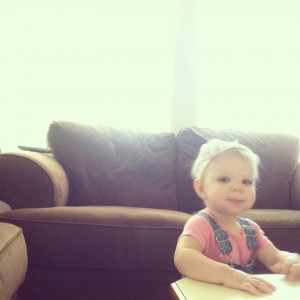 We had 1-year pictures taken a few weeks ago…I’ll get around to sharing those soon enough.