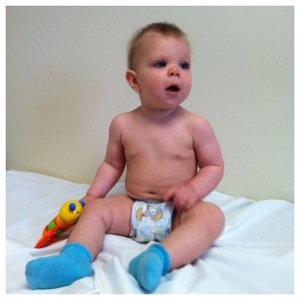 At Reese’s 9 month appointment last week our pediatrician sent us downstairs to the lab with an order for blood work to test for anemia. I thought it was odd mostly because I don’t remember doing it when Rylee was a baby. Reese was great during the draw…she let out an angry little squak just after they pricked her finger then was silent, giving the phlebotomist the death glare the entire time she squeezed drops of blood out of her tiny little finger. They got what they needed and sent us on our way telling us we’d get a call with the results in a couple of days. I didn’t think much of it because a) it seemed like standard procedure and b) upon telling us about the blood draw, the pediatrician said she wasn’t worried because of the great things Reese eats like black beans and broccoli.

When I got the call, I was at work and on a conference call so I let it go to voicemail. You know it’s not the results your were looking for when they leave you a message saying you need to call them back to discuss the results. I knew right then the answer was that Reese was anemic.

What is anemia: The easy answer is, Anemia is a fairly common blood disorder that occurs when the red blood cell count is low. {lots more info here.}

Side effects of anemia in babies: Though Reese wasn’t really showing any of the “symptoms” of anemia, from what I’ve found common symptoms/side effects in little ones can be…

The Cause: After speaking with the nurse and researching it more, there’s a few different factors that I think are contributing to Reese’s anemia.

After doing more research and speaking with the nurse, this wasn’t as daunting as I had originally thought. We’ve already started Reese on a more complete diet and the supplement. She’s loving the food, no surprise. But she hates the supplement…I see that being a battle as the days go on. I’ll make sure to update after our 6 week recheck!

Did you have a baby diagnosed with anemia? How did you treat it? Did it eventually go away?

7 thoughts on “My baby is anemic.”