Since Andy has been working NONSTOP down at the rental to get it ready for our new tenants (T-minus 5 days, folks) I knew I needed to have really fast, really easy dinners this week. But I also didn’t want them to all be hotdogs.

My slow-cooker and I kind of have a hate-hate relationship. I’m convinced it actually cooks on sterroids because anytime I cook something on “low” heat it’s done if HALF the time the recipe says it will. HALF…that totally throws off the entire concept of a “turn it on before you leave to work then have dinner ready when you get home” slow cooker.

However, since Andy was going to be home with Rylee for the day, I thought this would be a pretty safe, non-hotdog recipe to try.

Although I will admit… I was very skeptical.

I found the recipe on my go-to easy recipe website, the trusty old Kraft Foods. Instead of my typing it all out or trying to mess with the formatting of copy & paste, you can find the recipe HERE.

I did alter a few things in the recipe…for example: I used a spicy italian sausage instead of ground beef, I used part skim ricotta cheese and I used fresh basil instead of parsley.

I was able to get most of this prepped the night before so that I could throw it together Monday morning and put it back in the fridge for Andy to turn on later that day. I had Andy put it in at 2  PM because according to the recipe it only takes 4 hrs to cook and I figured w/ my track record I’d better skim off an hour or so. 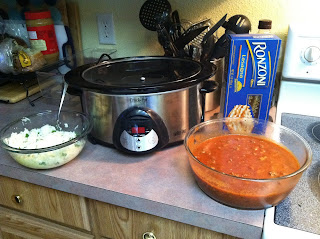 About this time I’m thinking “Really? This is supposed to work?” 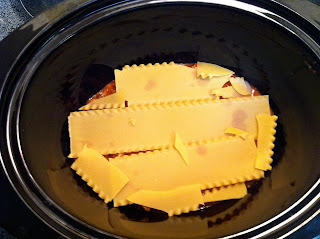 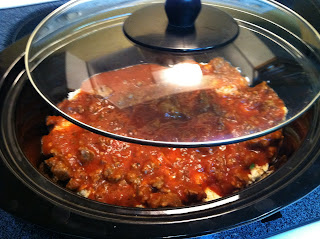 The after-math. Yes, it was so good that 2 of us ate almost half of it.
Judge away folks… 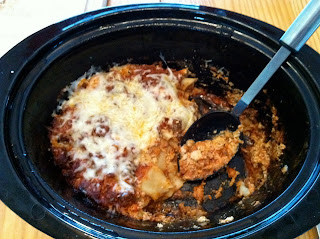 So there you have it! Easy. And it was ready when I got home from work…all I had to do was melt some more cheese on top.

And also? Please make a note that this is NOT mexican food!

One thought on “Recipe: Slow-Cooker Lasagna”