Nothing like including a direct link on your Christmas card to get your butt in gear to freshen up this crusty corner of the internet that you can’t seem to bring yourself to let go of.

If you’re new here, thanks to the back side of our Christmas card, Hi! and Welcome! Don’t expect too much. What was once a thriving (self-sustaining even!) blog about our family life has been pushed further and further to the farthest back burner as more children have been grown inside my belly, birthed, then continued to grow outside of my belly. It’s like with each additional family member, time has exponentially sped up and there’s barely enough hours in the day to make sure all the kids are fed and showered, let alone time for updating this blog. Funny how that happens, hey?

If you’ve been around these parts before, Hi, again! Don’t expect too much. I would love to say that my new year resolution for 2018 will be to start writing again, but let’s not get ahead of ourselves.

Basically, it comes down to this: I truly enjoyed creating last year’s “holiday letter” so I wanted to do it again.

Continuing with the theme of time flying by, what the heck happened to 2017!? When trying to come up with snippets and highlights to share for our recap, I had to scroll through the pictures on my iphone by date just to make sure I had the year right.

Probably the most exciting thing that happened this year was our road trip. This summer, the five of us loaded up in the truck and hit the road for College Station, Texas! We went because my work is based there. For me, it was nice to spend more time than a rushed 4-day trip that happens every few months. For Andy and the kids, it was like any other summer break day at home, just with a swimming pool at our rental! Along the way, we hit the Hoover Dam and Grand Canyon. We snuck in plenty of fun while we were there too, including spending our last weekend with my boss and his family and some of their friends on one of the family ranches. We did a little of everything “Texas” – hunting, hiking and exploring, fishing in the pond, swimming in the same pond, shooting, relaxing on the front porch. It was the perfect end to our trip. The kids were real troopers with the long days (and nights) in the truck. Overall we were gone for three weeks, and while we all enjoyed our adventure, we were happy to get home. 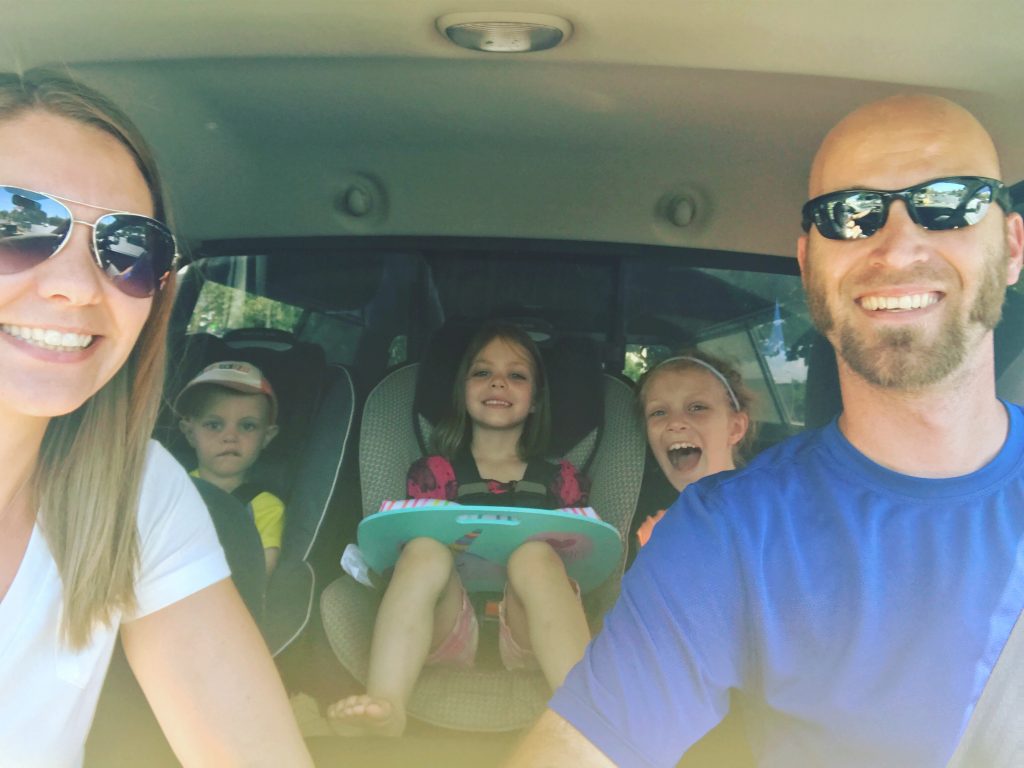 Seemingly less exciting than a 4,000-ish round trip adventure, but a just as important milestone in our house happened in March. We got chickens! Real, live, egg-laying chickens. This has been a long time coming. Just ask Andy’s buddy Keith, who helped Andy unload the chicken coop his shop class built what… 4 years ago now? It’s been a back-burner project for a long time, and it was really exciting for us to get it done! We started off with 3 pullets (not chicks, but not full grown hens), assuming at least one of them would die and it’d be an easy way to “work out the kinks.” We now have 7 hens and they’ve all been named, much to my initial dismay – they’re not pets! I insisted. – Yes, I know all their names, but I usually just refer to them as “the ladies.” I’m pretty sure I love them more than the kids do now.

Rylee is now 9 and in the 4th grade. She is still very into American Ninja Warrior. So much so that back in April she was asked if she would want to give a speech at an event all about celebrating what makes them unique. She agreed and in front of an audience of about 100 people she spoke about her dream to be on American Ninja Warrior someday. I recorded the speech and shared it on the ANWNation facebook page and they turned it into a blog post on their website! Rylee was so excited about that. THEN! Her ANW hero Jessie Graff tweeted about Rylee by name and shared the link. Rylee was over the moon. In July Rylee got to meet and train with her ANW hero at the local ninja gym’s grand opening. There’s no safe doorway or wall in our house anymore. Everything has turned into something she can train on. Outside of her ninja training, Ry continues to work hard and do well in school, she’s decided her sports focus will be soccer and basketball, and she’s really into helping make dinner lately. And she’s at the point where it is actually helpful! I’d use this space to say something about wanting time to stop and for her to stop growing up, but I’ll be honest, I kind of love it! The person she is growing into is just plain awesome. 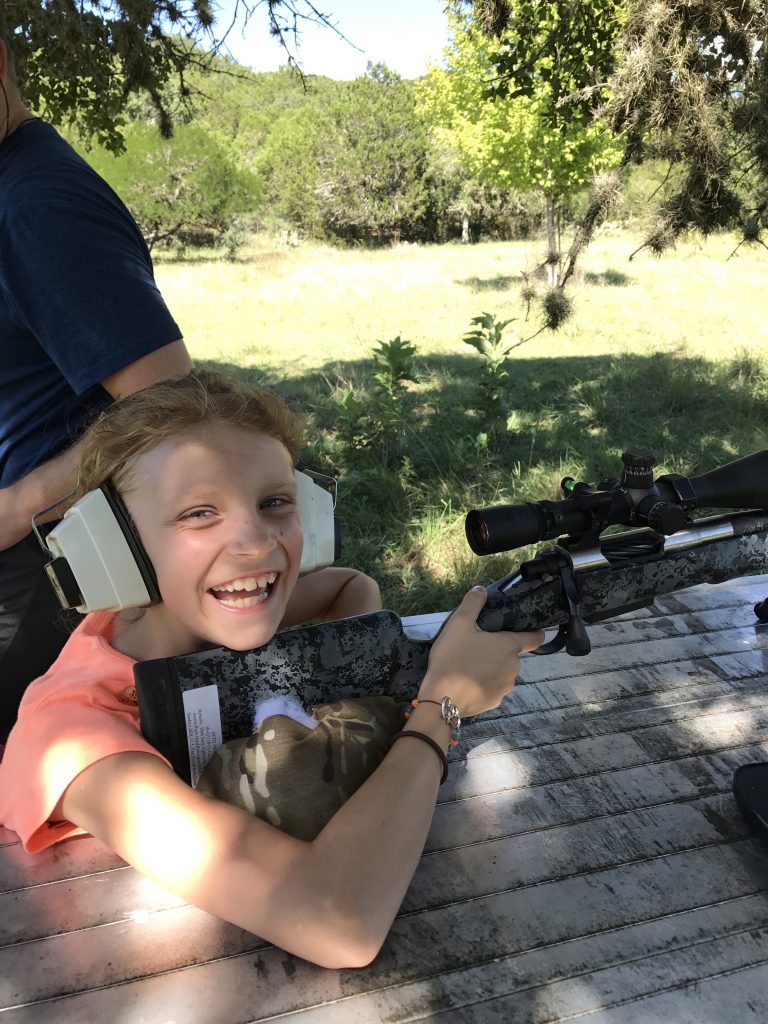 Reese turned 5 in July and this has been a year of big milestones for her! She started kindergarten this fall, she finally gets to ride the bus, she finally got to play soccer, she lost her first (and second!) tooth, and she got her first “real haircut” at a salon. She wanted it cut “all the way to her head” but ended up deciding on just so her hair touches her shoulders. The short, sassy style matches her personality perfectly. At her Pre-K graduation ceremony, Reese was in charge of carrying in the American flag, asking the crowd to stand for the Pledge of Allegiance, holding the flag during the pledge, then concluding it with a loud “you may be seated.” She took her job very seriously and when Andy and I asked her about being chosen, Reese informed us that is was because she was “responsible enough and loud enough.” We got a good laugh about that last part because that’s our girl! Outside of all the big things that seemed to happen for Reese this year, she’s also following in her sister’s footsteps and loves American Ninja Warrior! She has figured out how to “spider jump” up the door jam to the pull-up bar and is now working on those pull-ups! 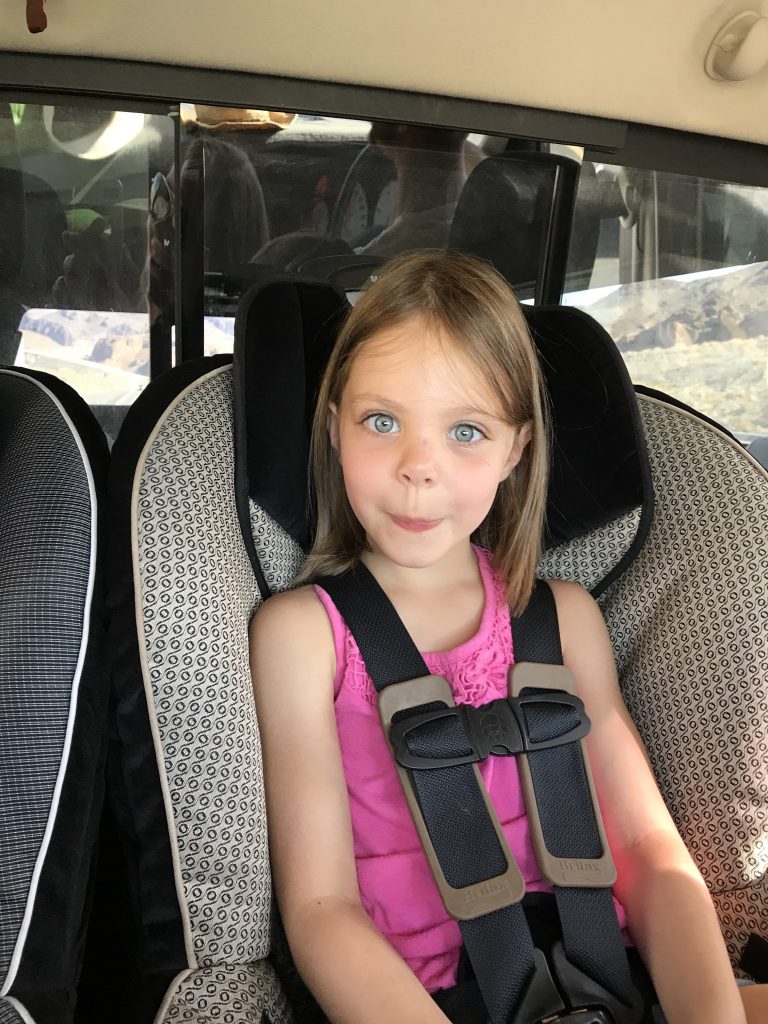 I gotta say, I really love that we have two strong and confident ladies on our hands!

Lincoln is 3 as of October and certainly coming into his own. He still gets along great with his sisters (most of the time), but let’s just say that things can … escalate quickly. I joke that he’s a curmudgeon old man in a three-year-old’s body. He likes things just so and he’s not a big fan of when those things change. Case in point: he graduated from a crib to a big-boy bed over the summer! However, six months later he still talks about his crib and how he wishes he still had it. We are also officially a diaper-free household! BIG KID LAND IS THE BEST! These days he really enjoys playing with his train set and anything that resembles a tractor, dump truck, front loader, or skid steer. He also spends a lot of time with his red little tikes car flipped over in the middle of the living room “fixing it.” He is still very much a mama’s boy (I’m certainly not complaining!), but he loves working out in the garage with Andy and spent many hours out there this summer “building stuff.” 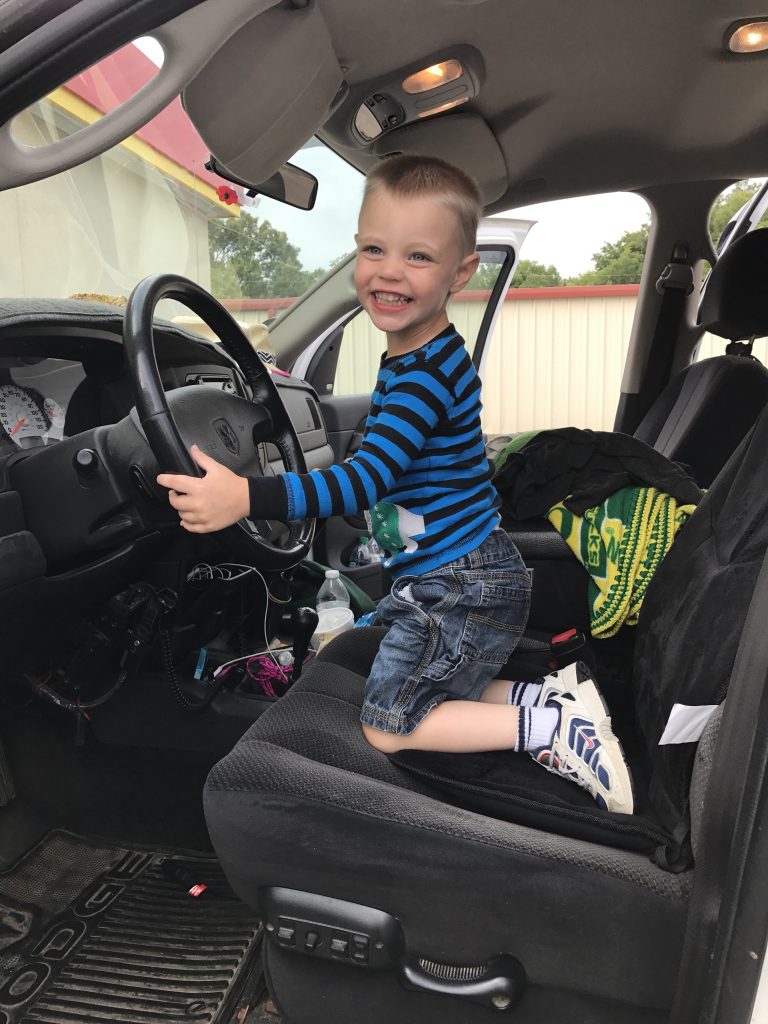 Speaking of building stuff, it seems like that’s all Andy doe these days! He certainly keeps busy around the property with projects – my home office was in the works until a windstorm destroyed our pole barn last April. The set off an entire chain reaction of projects that left Andy very busy outside. He demo-ed the pole barn, salvaged everything he could and cleared out the rest. From what he saved, he’s built us a carport off the side of our house, an awning off the front of the brick house, and even repurposed some of the metal roofing to be the ceiling in my office. He’s also been working on the site prep for the new pole barn to go up. That included having 16 dump trucks of gravel brought in! This September kicked off Andy’s 14th year of teaching. He has been very busy at work helping to build their CTE programs, and even assisting in designing and team-teaching an Ag-intensives class. So far for that class alone, he has taught 2-week long units on concrete work, framing, welding, and basic car maintenance. In addition to that class, he is also teaching middle and high school PE, shop, and a construction math class. He’s having a lot of fun this year. But probably the most exciting thing that happened over the last year for Andy was his back. After living with constant pain over the last 10 years, seeing a specialist and multiple physical therapists to no avail, he blew it out (again) back in February. Despite that being a really terrible, painful, and hard thing, it’s really been amazing. He started with a new physical therapist, and after 5 months of pretty intense therapy, Andy’s back is back to what it was before he ever hurt it 10 years ago. He can run again! He can do more than a few hours of work before being in serious pain! He can sleep again! Did I mention he can run again!? As cliché as it sounds, it’s really changed his (and our) life. 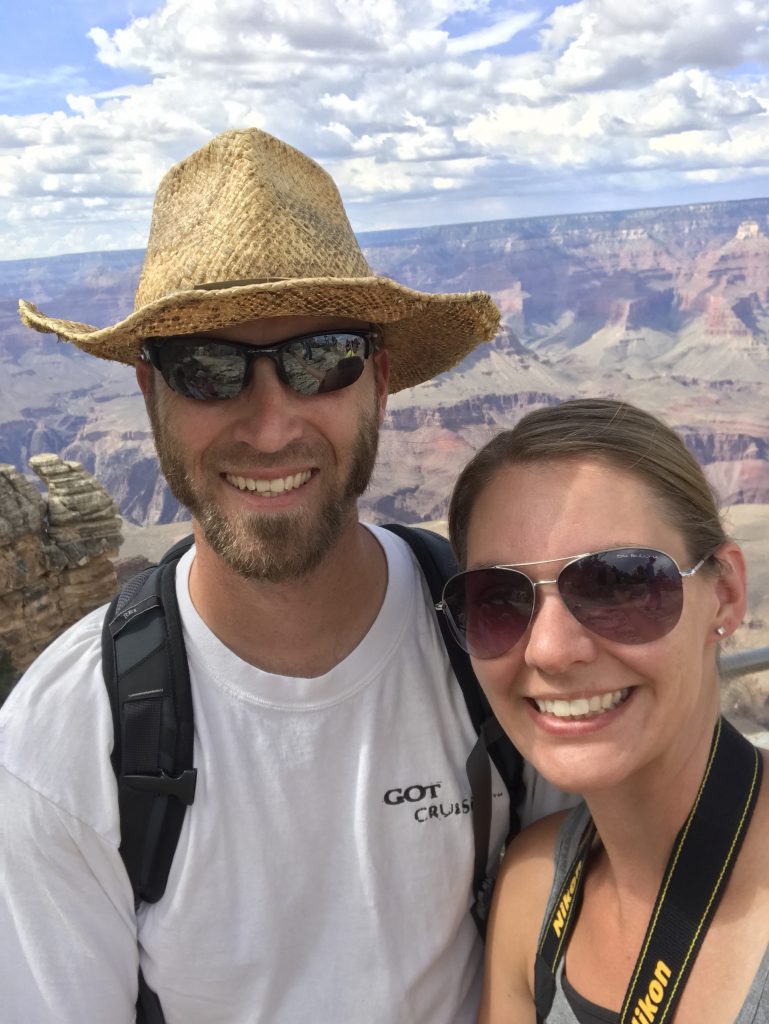 As for me, life consists of working and, well, everything else you’ve already read! I still love what I’m doing and consider to be working my dream job. I try to have some fun here and there. I was able to help Andy quite a bit with the carport project, I’ve helped with the office project, I went to Chicago for a girls’ weekend. Beyond that, I’m just trying to keep practice schedules straight and to remember to have the girls keep those damn reading logs up-to-date and turned in.

Every year seems to get better and better and we can’t wait to see what 2018 has in store! 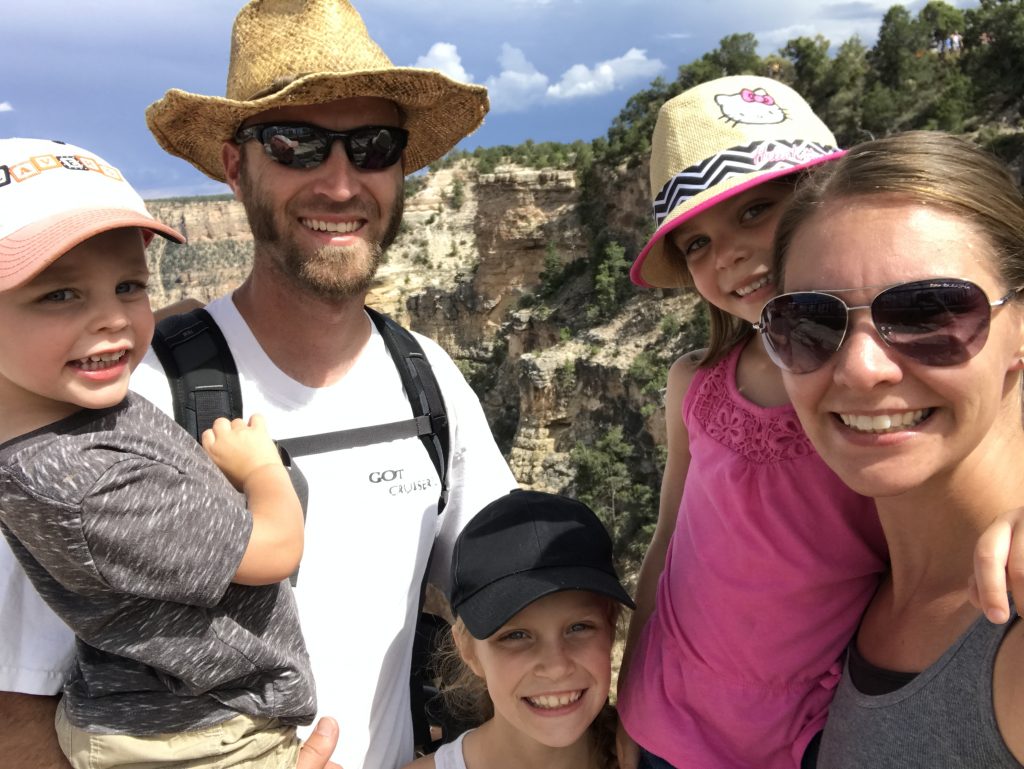 Sending you wishes filled with love and laughter this holiday season!