I clearly haven’t been that great at blogging lately. Crazy how life kinda gets in the way. It’s not that I haven’t been thinking about blogging. In fact I’ve had almost a half dozen or so unfinished posts just sitting in my drafts for up to three months now. It’s things I want to share but either don’t have the time to really finish or just don’t have the motivation. So there they sit…partial thoughts and half written posts. Until now…

Hawaii
We’re headed to Hawaii!! While we’re going for a wedding, we’re doubling the trip as the family vacation we were planning for our tenth anniversary. First I was excited with the idea. Then I booked plane tickets and had a mild panic attack soon after I hit “buy now”. {Not having discretionary funds for so long does messed up things To ones mind when it comes time to actually buy something not technically “needed”. Having the money in the bank makes no difference.} Now that I’m done with the freak out, I’m back to excited. Because Lord knows we’ve earned a vacation and…HAWAII! I’m sure come June I’ll be looking for tips in flying with a 1 year old.

Baptism
We had Reese baptized back in early December. Yep, over 2 months ago. It was a low key ceremony held with just family right after mass. My sister and my brother are her god parents. Reese is wearing the same gown that Rylee wore, that was hand made by a woman in our church. The deacon that assisted in mine & Andy’s wedding, whom also baptized Rylee, baptized Reese. That meant a lot to us. {and being the mom of the year candidate I clearly am, I forgot the camera so all we have are phone pics. Winning!} 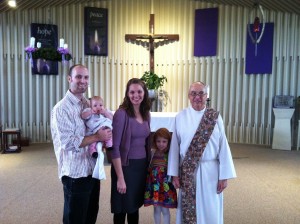 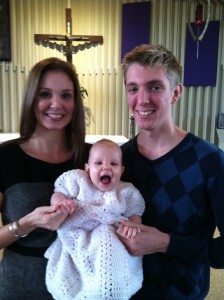 Car
Back in November we bought a new car! I’ve mentioned it a time or two before, but have yet to “give you a tour”. It’s pretty much awesome. We love it. We’ve had it barely over two months and we’re already taking it in for its first service. In 2 months and one week we’ve put over 5,000 miles on it. That my friends? Is a shit-ton of driving.

Right now I’m kind of struggling with some blogging things. I’d love to grow my readership and eyeballs that see my little corner of the Internet but lets be real…I don’t write earth-shattering-viral-material, I’m not an “authority” on anything, I’m not a DIY-er, my photos are hardly pin-worthy. I cook some really tasty things, but I seriously lack in decent food photography skills. Or really any photography skills for that matter. Heck most of the time, I’m recycling photos I’ve posted in Instagram. Why would people want to come here? Why am I really doing this? For me? For my girls to look back on someday? Sure, that’s all part of it. I squeeze blogging into my lunch breaks because when I’m home from work, I’m cooking dinner, bathing kids, putting them to bed and oh you know, attempting to relax with my husband. It’s blogging this is something I do for fun and my family comes first. So what I do needs to be enough. I’m currently in the process of coming to terms with that. {in the meantime, if you’d like, feel free to tell all your friends about this super awesome, hilarious, riveting, real, ____(insert chosen adjective here) blog.}

Back in September I wrote about being ready to lose some baby weight. Then…well…I didn’t really follow through with that. I mean, technically I’ve lost the weight and I’m back down to my pre-baby days {thank you breast feeding!} but things are…squishy? {Seriously…my poor belly button} Now that we’ve got Hawaii on the horizon I’m officially motivated to get beach ready. Instead of focusing on losing lbs, I’m going to focus on losing inches and toning/definition. I want to be fit and healthy. Not just a certain number on the scale. And let’s be real, no way in hell I’m giving up coffee creamer, cheese, my daily sweet tooth attack and the occasional dr. Pepper. I’m not that motivated, people. I’ll be meeting with a friend/personal trainer in a couple of weeks. She offers classes at her own gym but I’m not able to make them due to my schedule. So we’re going to go over my goals and she’s going to show me some exercises I can do at home, or on my own at the gym near my work. And yes, I’m actually planning on blogging my progress.

This cold/crud I was down with almost two weeks ago is still lingering and its driving me bonkers! At this point I feel fine and it’s nothing more than a stuffy/runny nose and a cough…but holy crap is it annoying. I’m thinking how Andy must think he married the sexiest woman in the world every morning as I’m hocking up loogies in the bathroom while I’m getting ready. What can I say? He’s a lucky man. Hawt, I know.

So there you go…all of my half-written posts wrapped up in a pretty, mediocre bow. I’m off to clear out my drafts and start fresh next week. Happy Friday!