Father’s Day weekend was a flat-out fantastic weekend. But I’m not here to talk about that.

I’ll get to it later.

And yes, I know it’s unlike me to go out of chronological order, and it’s killing me a little bit, but last night was just too awesome not to share right now.

We took Rylee to her first baseball game.

Of course, there’s a lot of you that are probably like…neat, Kat. What’s the big deal here?

Well, here’s the thing. It was probably way.more.awesome. for me than it was for the kid.

Last night had so many of my favorite things wrapped up into one!

First of all, I love-love-LOVE baseball. I grew up going to Em’s games {our local minor league team}. I have such fun memories as a kid going to these games. Andy loves baseball. I love watching him watch a sport he loves. I mean, he’d much rather be playing than watching, but whatever. Then there’s the whole thing that baseball means summer! SUMMER!! Yay! And of course there’s the snacks…locally made ice cream served up in a “batter’s helmet” bowl. Nachos. Pepsi. Popcorn.

Ach, I just love everything about it.

Now throw in the fact that I got to go with my 2 favorite people in the world. And we had some pretty kick-ace seats {thank you Em’s for those awesome tickets!}.

It was a recipe for a great night. 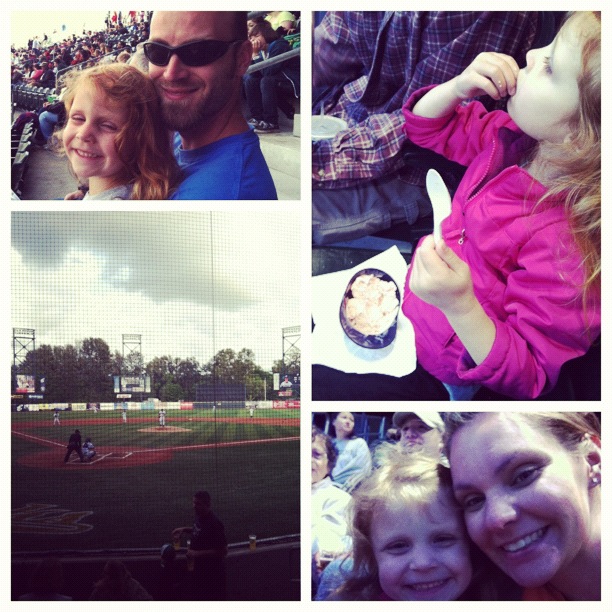 For being 4 years old, and for her very first game, Ry did pretty well. She got antsy a couple of times. During the 4th inning we got up and stood in line for the ice cream and snacks, that helped break things up. Then she was occupied with eating as much popcorn as she could shove in her mouth for the next few innings. At the top of the 7th, she told us she was ready to go. We stayed to watch the Em’s bat one more time then we took off. {It was also about 9:30 PM…way past her bedtime!}

This night at the ball park was just what we needed after a stressful spot after work….the Buick died on me during my drive home last night…twice. {For the record? Figuring out your hazard lights don’t work when you actually need them is less than ideal} Andy had to meet me at my dad’s (about halfway between work and home) and then we had to get home, eat dinner and rush to the game. All the while trying to figure out next steps with this car. Blech. But like I said earlier, more on that later.

3 thoughts on “Some of my favorite things!”