Seriously…I have no idea. I’ve thought over and over and over again how to put into words my time with Clever Girls and some of the other ToyotaWomen at ToyotaUSA in Cali last week and to be honest, I’m struggling a bit.

Struggling not because it was a bad trip or it lacked information. Actually, the complete opposite is true. I could seriously go on and on about what I learned. But, what I’m struggling with is how can I share all of this with you without sounding too…paid/contrived/promotion-y. You know?

So bare with me, because I have so much I want to share and it is truly out of excitement for what this company is about and what they are doing and this is the first time that I have ever experienced something like this…especially as a blogger. My Wednesday morning started out like any other morning. My alarm went off at 5:20 AM and I got up, showered and got ready for work. I left for work at my normal time and did my normal work thing until just after 11 AM when I shut down my computer and headed out of the office to begin my journey down to LA…or so I thought.

I grabbed lunch and headed to my dad’s house where I parked my car and he took me to the airport. I walked in to NO ONE in line for security. Sa-weet! It was too good to be true. Turns out? My flight was cancelled! So I hopped in the back of a very long line to get rebooked. For the next day.

My trip was already going to be fast & furious. Now? Just cut that down by about 24 hours. I called Edita at Clever Girls who had booked all the travel letting her know what was up and wondering if I should even bother still coming if I wouldn’t even get into LA until 9:15 AM the next morning. She assured me that I should, so that was my plan. I headed home and spent the rest of the afternoon with Andy & Ry.

My alarm went off the next morning at 3 AM. Yes, THREE in the morning. So I could shower and look halfway presentable for a full day at Toyota HQ. My flight landed at LAX at 8:45 AM, a half hour early! My driver was there waiting for me. No hat, but he was holding a sign that said my name. He took me to the hotel where I checked in, dropped my bag and headed back out. This time on to ToyotaHQ. When I got there they were just finishing up a session. And from this point on the day seriously flew by!

I took notes like I was in college again. Everyone I met that either worked directly for, or with, Toyota had such a passion for what they were doing and you could tell they truly enjoyed their jobs. Toyota is a company that is seriously committed to safety, the environment, education and really giving back.

On the giving back front, not only do they provide monetary sponsorship/grants/donations to a number of organizations, they also have a number of their own programs they have pioneered like Toyota Tapestry, a program that provides grants to K-12 science teachers, Toyota International Teacher Program, a 2 week exchange program for teachers, and the newest, 100 Cars for Good. {watch the video}

From a personal and professional standpoint, I really loved learning about their product launch cycle. And coming from a company that has taken a product from concept to launch in 30 days, I seriously couldn’t fathom having a 5-6 year timeline to work off of. {Seriously, this was one of the highlights of my entire trip, but I won’t bore you with all the details}

There was a stack of vehicles at our disposal to take out for a spin! I tried out the PriusV, the all-new Camry SE and the Venza. I also spent quite a bit of time checking out the Highlander Hybrid as well as the Sequoia. My very favorite was the Venza, hands down! So much space…but still car-ish and still decent gas milage (at least comparable to the Buick we’re driving right now). Seriously a fantastic mix of everything we would need in another car. {More on the car driving later!} We toured the Toyota Auto Museum…that was pretty cool. Andy would have been in serious Cruiser heaven! And another highlight? I got to sit in a race car. 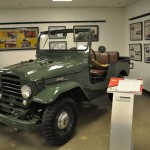 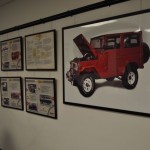 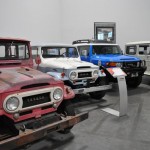 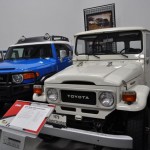 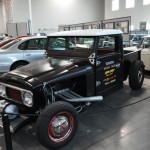 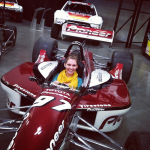 We wrapped up the “learning” part of the day with a quick recap and photo opp of the group. The evening ended with an amazing dinner that I wrote about here.

Seriously…all in all an amazing experience that I will not soon forget. If there is anything you want to know more about from my trip just let me know!

And, a huge, HUGE shout out to the Clever Girls behind the event. I’ve put together events kind of like this before and I know how much work goes into it. They did a fantastic job!

Other cool facts about Toyota that I didn’t know before:

-They’ve had Toyota USA HQ for over 50 years.
-Since they started keeping track in 1991, ToyotaUSA has contributed more than a half a BILLION dollars to philanthropic causes.
-From raw material to finished product, over 90% of the Camry is produced right in the USA!!!
-Toyota has been “doing green” since 1969 when they formed their first environmental committee!
-Toyota has pioneered a collaborative research effort for testing safety standards in not only their vehicles, but the entire car industry.
-Toyota’s new EnTune system that syncs your smartphone to your car giving you instant access to apps like Pandora and Bing as well as others.
-Toyota has created over 360,000 jobs in the US.

4 thoughts on “My #ToyotaWomen Whirlwind Continued…”