So it’s Saturday afternoon and instead of washing dishes or folding laundry like I typically do during nap time {stop laughing, it’s the truth}, I’m sitting on my butt. This time not really by choice. I have no water .

We’ve been having some major water drama over here for the last 9 days or so. When our plumber-friend came over that first night and “fixed” the problem within an hour, I couldn’t help but think that was too god to be true. And well, I was right. Then after coming back over and working on the system all day last Saturday, turns out we need a whole new filter system for our pump house/well. Ok, not the end of the world, right? We were able to bypass the broken filter system so our house and the rental could have water for showering, flushing the toilet, etc through the week. I figured I’d wait to do laundry because our water straight out of the ground has a really high iron content and I didn’t want it to discolor our clothes. We also figured we’d just use as little water as possible so the high-iron water didn’t damage our water heater.

Well, as Andy and our plumber-friend were working out a plan for our new filter system we found out a few things we hadn’t known previously about the state of our water. After some water testing, we found out that not only does our water have an extremely high iron content, it also has a funky ph level and traces of bacteria. All of which are certainly not the end of the world individually, but combined it meant that we couldn’t just get one type of filter system or the other, we have to get both. Nearly doubling our cost. Kind of a tough one to swallow, but for the best, so ok, fine, whatever.

Our plumber-friend was able to order up our new system to have it ready to install today {thank GOD!}. So yesterday, while Andy was home he decided to prep the pump house for the new system. While moving something around or something {I’m fuzzy on the details here} a pipe was broken causing a leak in the pipeline to the rental. Andy had to completely shut off their water…they were less than pleased, obviously. Andy told them when they were ready to shower to call him and he’d go down to the pump house to turn their water back on, but it meant that they couldn’t do any laundry.

Ry & I went grocery shopping this morning, stopping for Subway on the way home to feed the guys {I’m kind of over cooking in my kitchen right now}. When I brought lunch home, I find out that, of course, things are not going as they should and we might not have water turned back on until sometime tomorrow. Something about having to trench something and blah-blah-blah.

I swear Andy is cursed. I call it the Rice curse, because his dad kind of has it too. Basically, whatever they’re working on, whatever the project might be, no matter how long it is “supposed to” take, something will go wrong and said project will take at least 3 times longer than it should to complete. It doesn’t matter if the project is something as simple as changing the oil in the car. What should take about 20 minutes, will ALWAYS take 45-60. Working on something on the farm truck? What should be bolted on with a standard bolt isn’t standard at all and in fact requires some special tool that will cost a shit-ton of money and take a bunch of extra time. Nothing ever goes right for him.

Look, I know it sounds like I’m complaining here, and well, I kind of am. I realize it’s probably way more frustrating for him than for me so I really try to stay positive in any situation, but…well, sometimes it’s really hard. It seems like it’s just been one thing after another with this water-drama and it’s wearing on me.

I always try and find the “silver lining” but I’m having trouble this time.

I feel like my house is in complete disarray. There is laundry piling up beyond anything I’ve ever seen. I am wearing the same pair of pants for the umpteenth time since the last time they were washed.

And my kitchen? Oh even thinking about my kitchen has me totally overwhelmed. I’m thankful Andy’ grandparents bought us a 12 piece setting of flatware, but at this point we’re down to 2 clean knives and 3 clean forks. I think I have 1 pan and 1 pot that are still clean and usable. We’ve been using paper plates to lessen the load of dirty dishes, but that only helps so much… 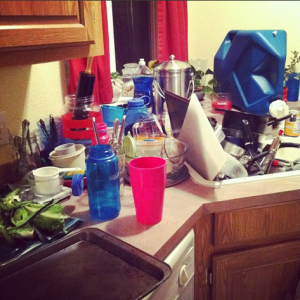 I am thankful that all the dishes have at least been rinsed so my house isn’t smelly on top of everything else.

It’s going to take a while to get all caught up on laundry and dishes…especially if we don’t have water until tomorrow sometime.

I really wish I could have a glass of wine.

Once this new system is in, it better be the best damn water I’ve ever tasted.