I had some major grand plans in my head about how this whole Angry Birds birthday party would play out but when it came down to it? I was too tired to stay up late at night to get stuff done. I bought a lot more than I had originally planned instead of hand making it. I texted a photo of the invitations instead of mailing them. I didn’t have enough boxes for my big giant life-size angry birds game. It rained on the day of the party so our game was played in the house and the piñata was setup in our woodshed. And the camera battery on my DSLR was dead.

It all ended up kind of ghetto-fabulous but guess what, the kiddos didn’t love it any less. 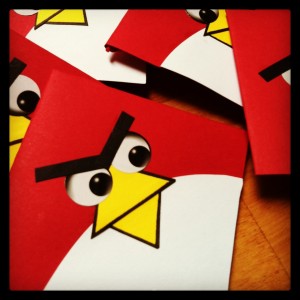 “life-Size” Angry Birds Game AKA empty boxes they took turns trying to knock over by throwing balls at. 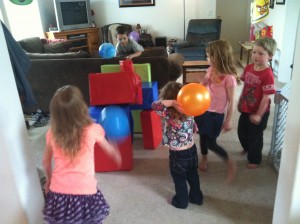 “Homemade” cupcakes, crappily decorated by yours truly.
{You’d never have guessed I used to decorate cakes as part of my job, huh?} 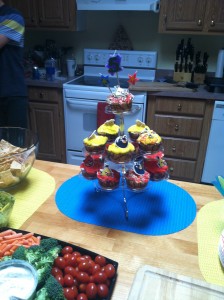 Angry Birds Kabobs…three blueberries because when you tap the blue bird, he bursts into three! 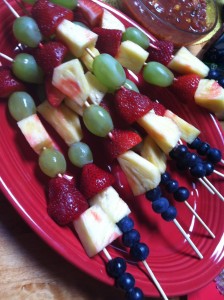 Can’t believe my girl is FIVE! 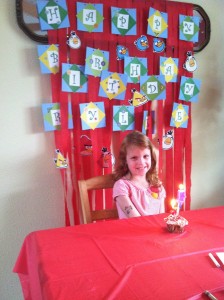 The pinata…that little bastard was pretty tough to break.

But that just meant all the kiddos got plenty of turns to try! 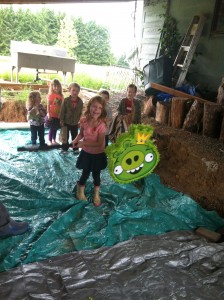 We had our friends, good food, lots of treats and temporary tattoos…what more was needed?!

The nuts and bolts:

Decorations: I made the banner myself for Ry’s birthday last year. The swirly jobbers I got here. The piñata I got here. The cupcake topper rings I found here. The invite and bird printables I downloaded from here. The life-size angry birds game I made out of wrapping various sized boxes in solid color wrapping paper. The table cloth and balloons I picked up at the dollar store. I also had Angry Birds color sheets out on the table.

The goodie bags: I bought Angry Birds corner book marks from my cousin’s hand made shop. I threw in angry bird Popsicles I found at the dollar store. I also included Angry birds tattoos from here as well as an angry bird disc shooter and sticker sheet I found at Target. I tossed them all into a brown paper lunch bag and topped it off with another printable from here.

The food: the angry bird kabobs were the only “themed food” we had…and I didn’t even call attention to it, so I’m 99% sure no one picked up on that. A pre-made veggie tray, cheese quesadillas and chips & guac rounded out the selection.

What am I missing? Eh, I don’t even know at this point. Feel free to let me know if you’d like any specific details. 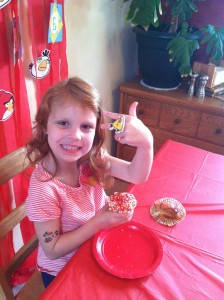