Oh man, last week drained me. I was ready for the weekend. And the weekend? Did not disappoint.

Saturday morning was pretty laid back…Andy worked outside for a bit while I hung out with the girls. While Reese napped Rylee & I had a tea part picnic then packed up a real picnic lunch. The whole family piled in the car and headed into town. While I got my hair cut, Andy took the girls to a nearby park where they played. After I was done, they picked me up and we ate lunch out of the back of the car.

After lunch, we headed down to the fairgrounds for the big home & garden show. It was packed! We strolled the aisles looking at ideas for a chicken coop and for our back patio we’ll be putting in this summer. {side note: Can I just point out that this will be the first year that we’re able to spend money on Our OWN house instead of dumping money into our rental! Holy crap we’re excited.}

Apparently the home show was just too much excitement for the girls because they both passed out while we were walking around. I had Reese in the ergo and Andy was carrying Ry. He got the short end of the stick on that deal! 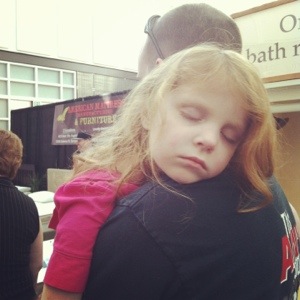 On our way home from the home & garden show, Rylee was chattering away, then out of the blue said, “I’m so glad we’ve had a family day today.”

Back at home Andy went back to work outside while Ry played in the SUN! I tried to pick up the house a bit. After Reese woke up from her afternoon nap, I fed her, then Ry and I loaded back up and hit the road. We picked up my dad then went up to Corvallis for the OSU women’s gymnastics meet. For the first 20 minutes or so, every time the gymnasts did something {anything} she’d stare in amazement and half-whiper “whoaaaa”. 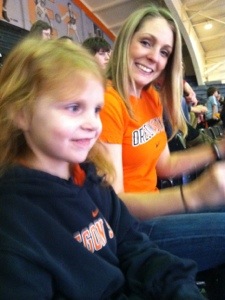 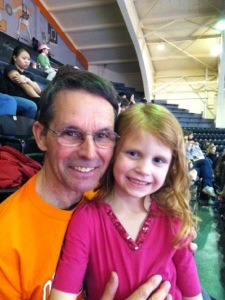 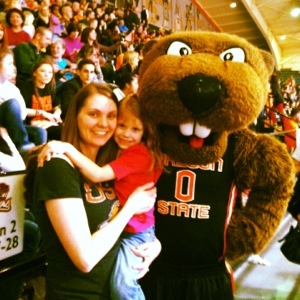 Ry did pretty well, only asking to go home just before the very end. It was about an hour past her bedtime and she was beat. But apparently on the walk out to the car she got a second wind because she was awake the entire 45 minute drive home asking my dad to tell her stories about when he was little. It was just as heart-warming as it sounds.

Yesterday was spent working around the house trying to catch up on everything that didn’t get done on Saturday. Andy worked outside all day {country living folks, the work never ends!} while I took the girls grocery shopping, then came home and busted out 6 loads of laundry, cleaned out the fridge, cleaned the kitchen, made some baby food for the week and a bunch of other random stuff.

We topped off the weekend with enchiladas for dinner and fresh brownies for dessert!

My soul needed the weekend is a serious way…sunshine, family fun mixed with just the right amount of work.

How was your weekend?

One thought on “This weekend rocked so hard.”