Toward the end of last week I was all sorts of excited for the weekend. And not just because my last weekend sucked a big-fat-ace, but because we had some fun stuff planned! {and by we, I mean me}

Friday night, we headed over to Andy’s parent’s house for a big turkey dinner, complete with stuffing, mashed potatoes and gravy. {No mac-n-cheese, but that’s ok, I’m not bitter} {Ok, actually I am…a little} Then, after dinner, because the rest of the weekend was going to be so busy, I went grocery shopping. I know! Grocery shopping, at 8 PM on a Friday and ALONE!? It was kind of mind blowing.

Saturday, I had plans to get up early and make an awesome tailgating dip because I was headed up to watch the OSU game with my sister. {Shout out to my awesome husband who insisted I go despite the fact that he re-injured his back and could hardly move all weekend} I figured my personal red-headed alarm clock would have me up by 7 AM. Guess again…I woke up just after 8! It felt great, but cue the HOLY-CRAP-I-HAVE-TO-LEAVE-IN-AN-HOUR panic. No dip was made. On the way out of town I grabbed a coffee. By the time I made it to the tailgate party, my coffee cup was empty and ready to be refilled with a margarita. The Beavs ended up losing, but I had a great time soaking in the last of the sun hanging out with my sister. It was much needed.

Sunday Rylee and I had a hot date with Costco and our friends Lindsey and Otto. And yes, I got “dressed” to go to Costco. It was the only place we went, but it felt good to get dressed. Our visit with Lindsey and Otto was nice, but cut short by two antsy toddlers who couldn’t understand WHY!? they couldn’t run and crawl around the Costco food court area like little banshees. Lindsey and I decided that next time, we’re leaving the kids at home and going out one night after work. The rest of the day was spent doing…well, not much of anything. Dishes. Laundry. Cooking dinner. Fun stuff, folks. It was glorious.

The entire weekend was absolutely glorious.

Ok, on to the Costco outfit… 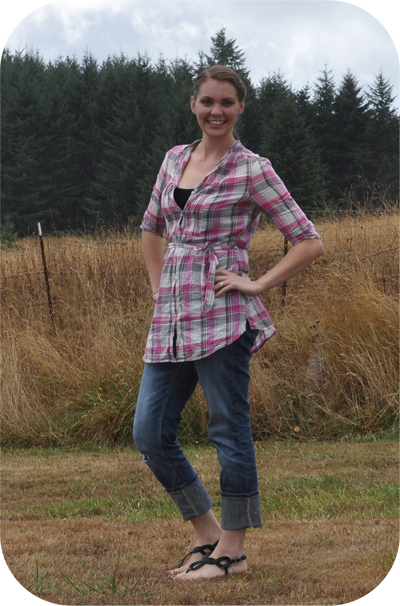 This one is easy folks…head to toe: Target

Linking up with Mandy!