So, last night I had a rare few minutes free at home alone so I decided to bust out some old cd’s to upload them onto my computer so I could transfer them to my iphone. It was seriously like a walk down memory lane…
I found this CD: 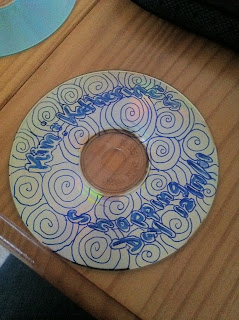 If you can’t tell by the awesome art what that says, it’s: Kim & Katherine’s Shopping Mix 12.17.01
That’s right…apparently, an afternoon of shopping needed it’s own dedicated CD. Well, at least according to my 16 year old, Senior in high school self and my awesome bestie Kim. Pssshhh…DUH.
I couldn’t wait to pop it into my computer to see the treasures it held.
Here’s the problem though…back in the day we didn’t have the option to “burn with text” so they all showed up as track 1, track 2, etc. So I tried to listen to all of them because surely, I would know what every single song was…
WRONG!
Out of the 16 songs on the CD here’s the ones I came up with:
1.                 All about Me. Toby Keith
2.     Some country song by Jessica Andrews
3.     Same Ole G Ginuwine
4.      I’m already There Lonestar
5.     Let’s Get married Jagged Edge Run DMC
6.     Whenever You Call Mariah Carey
7.     Rascall Flats
8.     I wanna be Bad. Willa Ford
9.     Butterfly Kisses
I used up all of my 5 free shazam tags in less than that many minutes to even get that many songs figured out. The rest was an equal mix of gangster hip-hop and country. Because, you know, we were cool like that.
I found myself shaking my head and laughing while at the same time tapping my foot to the beat and picturing us driving along in Kim’s Honda Prelude, radio way too loud, dancing along and belting out every single word to every single song.
Because you know that’s exactly what happened.
**********
On a side note, it has become clear to me that I have a ridiculous amount of mix CDs just like this one. That was all the rage in 2001…{that’s also some time around Napster, I believe}I only wish I had enough hours in the day to listen to all of them and figure out each and every song. Apparently my last year of high school didn’t suck nearly as bad as I remember it.