first thing this morning I had been sitting in the rocking chair in the living room enjoying some alone time before anyone woke up when Ry came out and crawled up in my lap. Instead of the usual cartoons and breakfast, she just rested her head in the crook of my neck and we rocked. Not long after, I heard Reese from her bedroom. I snuck out from under Ry, leaving her curled up in the chair. After getting Reese, I brought her back out to the living room to feed her only to find Rylee passed out in the chair. I headed back to Reese’s room to feed her in there. While I was nursing her, Ry came in and proceeded to pass out on the floor.

The entire time I was getting ready for work she was acting whiney and sleepy. Then even cried a little when I left. That never happens.

Even Reese was acting tired as I was leaving…about 45 minutes to an hour earlier than her normal napping time.

I got off the phone with Andy earlier today and he said none of them were feeling particularly chipper. Rylee has hardly been hungry all day. Reese sleepier than normal. And his throat is soar. Once he was done feeding Reese, he was going to take Rylee’s temperature.

Then I started thinking…maybe this runny nose & sneezing I’ve been dealing with these last few days isn’t allergies like I’ve been thinking.

I came home from work to a puking kid and a fevered husband.

Uggggghhhh…I don’t want us to start this nasty sick cycle all over again!

But at least it’s the weekend and we won’t be missing any work/school, right? {spoken like a true working mom} 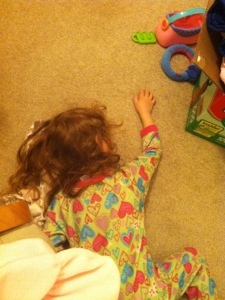