This parenting gig is funny. Just when you feel like you’re hitting your groove, something comes up and you’re completely thrown off guard.

Case in point? Ladies and Gentlemen? We have a thumbsucker. 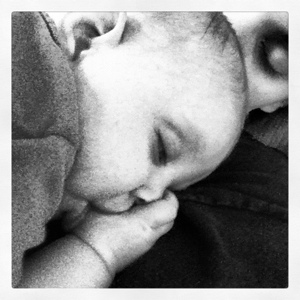 Rylee was never a thumbsucker. Never even took a pacifier. Never. Not even once. Don’t get me wrong, she figured out other ways to self-sooth. At a pretty young age, she developed a habit of sucking on her tongue by folding it in half in her mouth, if that makes any sense at all. Then just around the 1-year mark she discovered the love of blanket she’d never even used before and has hardly been a day without it since.

I get the idea of self soothing. And trust me, I encourage it! The last thing I want to do is use my nipples as a calming mechanism. No.Thank.You.

But since I never dealt with the thumbsucking with Ry, I’m kind of at a loss. As soon as Reese discovered her thumb, we figured we’d nip it in the bud and we started covering her hands with those newborn gloves. No luck. She’d either wriggle out of them or just suck right though them.

A couple of times we kept her from sucking her thumb while she was going down for a nap. Sure after an excruciating amount of time, she eventually fell asleep. Then no more than 20 minutes later when I went in to check on her she was sucking her thumb. In her sleep.

Within the last couple of weeks, we’ve kind of given up.

So now I’m at the crossroads of, do we continue on with allowing the thumbsucking, or do we try and transition to a paci?

There’s pros & cons to both. And there’s definitely not a lack of passionate opinions from people on the subject, either.

To be perfectly honest, I’d really prefer neither, but I feel like there’s obviously a reason she’s doing it. Sucking is the way she’s self-soothing, so at this point I’m just trying to figure out which is going to be the lesser of the evils.

She obviously already knows where her thumb is and has no trouble getting right into her face parts. If she had a paci and it fell out in the middle of the night, the last thing I want to have to do is get up, walk across the house just to stick it back in her mouth. That kind of defeats the purpose of self-soothing, no? Then again, there’s the argument that it’ll be easier to break the paci habit…I don’t want a thumbsucking 12 year old.

Not going to lie, I kind of think the thumbsucking is cute, but that doesn’t stop my practical side from taking over. All I see are dollar signs and orthodontic bills in my future every time she does it.

This girl is growing and changing daily. In some ways, she is so much like her big sister and in other ways, not at all. I’m loving every minute of it, but she’s definitely keeping us on our toes! 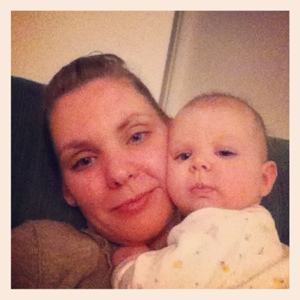 3 thoughts on “Throwing me for a loop.”